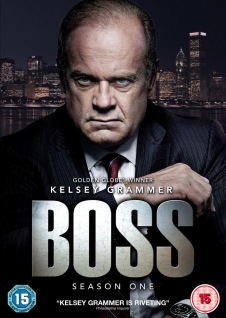 Tom Kane (Grammer) is mayor of Chicago, and rules with an iron fist. Behind the scenes, he has just discovered he has an incurable degenerative illness, one that is already starting to affect his mental faculties, and which will soon begin to have a physical effect too.

A combination of Shakespearean tragedy and American melodrama, it’s Grammer’s acting that is the most compelling aspect of Boss. He is simultaneously terrifying and unpredictable, yet under it all he also draws our sympathies.

It’s on its secondary storylines that Boss falls down, partly because there are too many of them. Kane’s wife Meredith (Connie Nielsen) is pursuing her own political agenda, and comes off as a one dimensional ice queen. Their daughter Emma (Hannah Ware) is struggling to keep the clinic she runs afloat and herself away from the drug habit which caused her parents to cut all contact with her.

Meanwhile there’s a storyline I didn’t quite understand about O’Hare airport, a journalist who’s determined to get to the bottom of a story about contaminated water, and a gubernatorial race between grizzled incumbent McCall Cullen (Francis Guinan) is battling handsome young hopeful Ben Zajac (Jeff Hephner), who is having an affair with Kane aid Kitty O’Neill (Kathleen Robertson), who spends most of her time explaining stuff or with her top off, or sometimes both.

Splitting the attention between so many storylines and people who rarely interact is ambitious, but means that it’s easy to lose grip with what’s happening, even if what’s happening is as horrid as someone getting their ear cut off. Personally, I would have cut two or three of the plot points and just concentrated on those that directly involve the presence of Kane, since scenes with him are easily the most interesting.

Boss is good, and certainly got better with each episode in the series, but I can’t help but feel most of the elements that make it up have been done better elsewhere: The West Wing did the political figure hiding a degenerative illness storyline with much more humanity, even though it was full of much more hope than Boss; The Wire did corruption in more detail; The Sopranos did the threats better; and Game of Thrones has the monopoly on sexposition.

But I would recommend Boss, if only for Grammer’s performance, which will have you wondering how he can be the same person who played Frasier. If Grammer can continue to bring that scary edge to Kane in the second season, and if some of the secondary characters and storylines can be drawn with more layers, Boss will go from average to great.