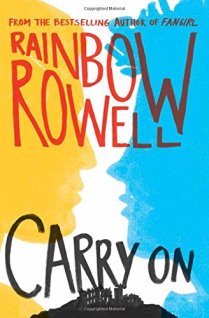 Have you ever had to keep quiet about a book by an author you love? And when I say keep quiet, I mean you can’t talk about its plot with anyone, or analyse the characters, or just gush about how amazing the author is.

It’s difficult, let me tell you. In the weeks since I read Rainbow Rowell’s Carry On, I’ve sent one email saying how fabulous it is (to the publicist, I didn’t break an embargo) and that’s it. But now, the time is finally here, and I can write to my heart’s content about Rowell’s first official foray into fantasy writing (she has written Harry Potter fanfiction before).
Simon Snow is a Mage. In fact, he’s not just any Mage, he’s the Mage who will save all other Mages, even if he can’t control his magic all the time, and is a bit clumsy, and hates, hates, hates his roommate Baz. And Baz? Baz is a bit mysterious, and from an old magical family, and he hates, hates, hates his roommate Simon. When Baz doesn’t return to school after the summer holidays for his final year, Simon becomes suspicious that he’s planning something evil, and with the Insidious Humdrum to fight, and a headmaster who isn’t really talking to and helping him, Simon is in a whole heap of trouble.
If any of this sounds vaguely familiar, it’s because Simon and Baz were characters written about by characters in Rowell’s absolutely amazing book Fangirl (that novel speaks to me). In Fangirl, Simon and Baz were created by a fictional author called Gemma T Leslie, and then put into fanfiction by Fangirl‘s protagonist Cath and her twin sister Wren.
But the Simon and Baz here are not those of Fangirl. These are Rowell’s creations written how Rowell wanted, and not as Gemma, Cath or Wren drew them. It’s best to think of this Simon and Baz as completely different to any previous Simon and Baz, so you don’t need to have read Fangirl to understand or enjoy Carry On (but you should anyway, because Fangirl is stunning).
Carry On is a Chosen One story, although it’s not your typical Harry Potter or Lord of the Rings (wonderful as those series are). Instead, it’s heavily grounded in reality. Simon Snow is the Chosen One, but he’s just a normal boy who’s actually not particularly talented or special. He just happens to have been given a title and is now doing his best to live up to it. And that’s hard, because what teenage boy would feel comfortable having the weight of the world on his shoulders?
The spells in Carry On are also grounded in reality. Instead of made up words or Latin terms, the spells in Carry On are all phrases. Any phrase can become a spell, provided the spellcaster believes in the spell. So ‘see what I mean’ results in the knowledge the spellcaster has about a certain subject being written down (or in the air, as the case is). And the world that Rowell has created is nuanced and totally believable (even though magic and dark creatures don’t exist, at least, not in my world).
And just like in real life, nothing is black and white. The Mage, the headmaster of Simon’s school and Simon’s mentor, is meant to be the good guy. But he’s kind of shifty and a bit weird, not your typical authoritative wise mentor. And the old magical families, who dislike the Mage, aren’t necessarily as evil as they are first presented.
One of the best things Rowell does is tell Carry On from a number of points of view, giving us a rounded look at the world she has created. We hear from Simon and Baz, whose relationship is complicated and compelling, and who form the centre of the novel. They’re very different, and also more similar than they can imagine. We also hear from Simon’s best friend Penelope, who completely rocks, from someone very mysterious called Lucy, from The Mage himself, and from Simon’s girlfriend Agatha, who could be a really drippy character, but is actually so complex, because all she wants is to be completely normal and that’s the hardest thing to be in the world of mages. I love the equality in Carry On, it’s diverse and its characters break stereotypes all the time, while remaining fundamentally human.
The charm of Carry On comes from its characters. Rowell is brilliant at writing great dialogue, at eliciting emotion, and at creating believable people who leap off the page and into your heart. The excitement of Carry On lies in Rowell’s talent for creating tension and in her action scenes, which are far from usual for a fantasy novel. And the novel is also fun, and funny. There’s plenty of humour, which is much needed and adds lightness to the novel, which can get pretty angsty at times (in the best way).
If this was Tumblr I’d be writing about how I have ALL THE FEELINGS because of Carry On. What the heck, I do have all the feelings about Carry On – it made me happy and sad and it made me laugh and brought tears to my eyes, it made my heart ache and my heart soar. It’s a brilliant first (official) foray into fantasy for Rowell, and I really hope she writes more.
How I got this book: From the publisher, Macmillan. This did not affect my review.