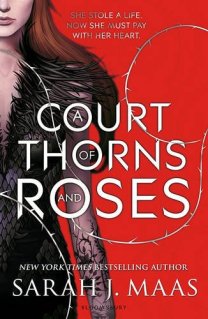 Her new series, which kicks off with A Court of Thorns and Roses, contains many of the same good points, but wrapped up in a new, original fantasy story.
When Feyre kills a wolf in the woods one day, she thinks nothing of it, glad instead to have killed what she thinks is a threat to her family. But the wolf she killed was no ordinary wolf, he was a faerie, and one of his friends, Tamlin, is determined to punish Feyre for her transgression. Tamlin takes her to his enchanted court, where she is free to roam but where threats lie around every corner. And as Feyre gets to know Tamlin better, she discovers he is no threat to her, but that his life and hers are in grave danger.
Feyre is the kind of heroine I like – noble, flawed, brave, headstrong, with plenty of faults. Maas writes her as capable and self-sufficient, but she’s not able to do everything and not willing to accept help without protest, which makes her realistic. That realism is important in a book that otherwise is almost pure fantasy – that the characters have believable characteristics and are relatable and likeable means I’m far more connected to the book.
The world Maas creates is fully realised – there are lush descriptions of Feyre’s surroundings, and a whole host of mythical creatures, plus a political system that sits at the core of the novel’s conflict. I like that A Court of Thorns and Roses is not a traditional good vs evil battle. There are more grey areas than that and that’s what makes it so much fun to read, and what makes the characters so interesting – often those who might seem bad actually have hidden depths, and those who seem good aren’t so on the straight and narrow.
There is some romance within A Court of Thorns and Roses, which isn’t unexpected but which does fit well, and doesn’t overwhelm the rest of the story. In fact, I actually really liked the romance aspect, because it challenges convention – instead of Tamlin going through a series of challenges and battles to save Feyre, it’s the other way round. And those challenges and battles are brilliant – full of tension so that I had no idea who would triumph, as there was never any guarantee it would be the ‘good’ guys.
In A Court of Thorns and Roses Maas has created a dynamic, original, exciting fantasy novel. It’s full of layers, great characters, and traditions flipped on their head, and it’s the start of what is sure to be a fantastic series.
How I got this book: From the room of books at work.