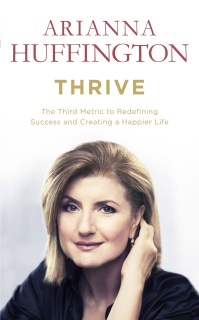 I don’t get enough sleep, I check my work emails at weird times, I don’t exercise as much as I should, and it’s difficult for me to shut my brain off.

So I’m exactly the target market for Arianna Huffington’s Thrive. In the book, the founder of the Huffington Post lays out what she calls the third metric – wellbeing, wisdom, wonder and giving – to redefining success and creating a happier life.
Thrive is full of statistics and extracts from scholarly works, as well as quotes from various thinkers and leaders on the subjects of mindfulness, connection and more. It’s obviously a well researched book, but it does feel a little cold at times, and a little like you’re being marketed to, as Huffington frequently mentions her Third Metric business. There are practical suggestions for things you can do to help yourself, one of which – a tip from one of Huffington’s uber successful friends to help her sleep better – I tried to put into practice. I failed, but I probably need to try harder, and others may succeed, with Thrive containing a good selection of further reading and resources that could help.
There are also personal anecdotes throughout the book, but a lot of times I didn’t really feel they connected me to Huffington. There are mentions of her divorce, but no mention of the emotional effects of it. Rather, the concentration is on how she and her ex-husband have an excellent relationship. Without knowing how Huffington personally dealt with a tough time, it’s hard to see its relevance or understand how Huffington used the things she talked about in her book to help her. Similarly, she briefly mentions how one of her daughters had a serious problem with drugs – it’s just dropped in suddenly and then barely mentioned again. Given that Huffington set up a news website, she’s big on committing one of the worst crimes you can, of burying the lead. The whole point of Third Metric is that it’s something Huffington really concentrated on after she collapsed of exhaustion, but again, I don’t feel like this is really explored enough.
There were times though when I did feel the ‘real’ Huffington came through, and that was whenever she spoke about her mother, who has inspired her throughout her life, including in her pursuit of the Third Metric. The stories about Huffington’s mother are infused with warmth, and the tale of Huffington’s mother’s death is sad. Huffington’s mother is an inspirational figure, and stories about her and her way of life provide some of the best, most feeling filled parts of the book.
It’s difficult not to compare Thrive to Sheryl Sandberg’s Lean In, although the books do tackle different subject matters. But where I found Sandberg’s book a call to arms and where it pushed me to really think about things, I felt that Thrive wasn’t a book that I could take anything away from long-term. If it had been filled with a bit more emotion and personality, I think it would have been a much better read. As it is, for me Thrive, while an interesting and easy read, is not the book to push me to get more sleep, check my work emails less, exercise more, and shut my brain off from time to time.

How I got this book: From the publisher, WH Allen. This did not affect my review.