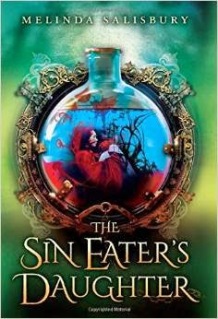 There is such a lot of young adult fiction out there that sometimes it all becomes much of a muchness, and you lose heart.

So I was relieved to discover Melinda Salibury’s The Sin Eater’s Daughter, which has a unique concept and which I could not put down once I started reading.
Twylla lives a life of luxury in the Queen’s palace, but she can’t touch anyone – for her touch carries death. The Queen uses Twylla as a demonstration of her power and her right to the throne, and Twylla reluctantly does the Queen’s bidding – killing those guilty of treason – in order that her family remains fed and protected. When Twylla’s betrothed – the Queen’s son Prince Merek – returns to the castle, and Twylla gets a new guard, the young woman discovers that she may be at the centre of a power play and her life in more danger than she ever realised.
The Sin Eater’s Daughter is a complex story, with Salibsury creating a world that takes its influences (and punishments and beliefs) from medieval times, but with a twist of fantasy added in. I enjoyed the way Salisbury put us right in the middle of Twylla’s life, with explanations about what she is appearing slowly, and sometimes even leaving the reader to work out what is going on, which I liked.
Twylla is a multilayered character, and a couple of those layers have been thrust upon her by others. She carries her mother’s legacy – before being taken in by the Queen Twylla was destined to take on her mother’s mantle as the Sin Eater, a woman who eats the sins of the dead before they are buried. And the Queen has given Twylla the identity of Daunen Embodied, which is complicated to explain but she’s sort of like the reincarnation of someone (easiest explanation).
Beneath those identities lies Twylla the young woman, and in some ways this book is about Twylla discovering the real her as much as it is a fantasy story. Twylla has spent her life largely isolated, and the trigger for her discovering her own power (inner power, if that doesn’t sound too cheesy) is the two relationships she builds with Merek and with her guard Lief.
I’m not a hater of the love triangle, but I’m also not the world’s biggest fan, as I like my heroines to stand on their own two feet rather than wait around to be rescued. Luckily, Salibsury’s love triangle isn’t really a love triangle, and the relationship between Lief, Twylla and Merek is nuanced and interesting. Sure, there are some typical love triangle moments, but the way Twylla acts and reacts is not typical.
It’s in its final stages that The Sin Eater’s Daughter, already so good at being different, really shines. Its climax brings about expected and unexpected things, and its closing act is so unusual as to be wonderfully refreshing. There’s no shortage of YA fiction out there, and The Sin Eater’s Daughter is a stand out, restoring my faith in the genre.
How I got this book: From the room of books at work.