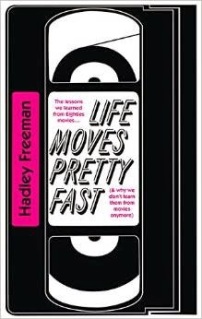 From The Breakfast Club I learnt that detention could be cool. From The Princess Bride I learnt that fairytale princesses can be tough AND feminine. From The Goonies I learnt that with a good group of friends you can do anything. From Dirty Dancing I learnt that you never put Baby in a corner (of course).
In her new book, Life Moves Pretty Fast: The Lessons We Learned From Eighties Movies (And Why We Don’t Learn Them From Movies Any More), journalist Hadley Freeman sets out the lessons she learnt from eighties’ films (obviously), in much greater detail and with a lot more thought than I ever could. Split into 10 chapters, Freeman focuses on a different film in each, from Dirty Dancing and what it said about abortion, sex and women, to Pretty in Pink‘s lessons on makeovers to how Back to the Future is really about the importance of parents.
This is, hands down, one of my favourite non-fiction books ever. It reads like a collection of scholarly essays injected with a massive dose of fun. Freeman’s analysis is smart, insightful and considered, as well as being witty, funny and gossipy. There are plenty of footnotes in each chapter, like on an essay you wrote for university. But don’t ignore the footnotes, they’re full of absolute gems, like the fact that the guy who played Robbie in Dirty Dancing went on to be a journalist and got addicted to drugs while trying to do a story on a cannibalistic cult, and then died. Seriously.
Life Moves Pretty Fast is full of stories that will make you gasp, laugh and cringe, but where it really shines is when Freeman tackles serious issues with her brand of warmth, sarcasm and cleverness. I especially loved the chapters that looked at the perception of women, with Freeman arguing that 1980s films featured a host of independent women whose success and style were celebrated; in contrast with what came in the 1990s, when female characters in film so often had to change to attract men (Freeman cites Clueless as the first of those films, and while I adore Clueless, I can’t help but agree that it wasn’t great for female characters).
And the final chapter, on how Eddie Murphy transcended race, made me think in a whole new way about Murphy’s films (the ones in the 1980s anyway), and their place not just in the 1980s movie canon, but also in the wider context of films featuring people from ethnic minorities in lead roles. There are certainly more important things in life than film, but Freeman shows why films do matter, and that it’s ok to take them seriously and look at them as saying something about society.
Even when Freeman is being serious, though, this book is still fun. It reads a bit like when a friend, who is really into something (a film, a TV programme, a book), tells you about it and is really intense and has clearly thought about it too much. I am that friend, and I think so is Freeman. There is just one huge problem with this book, and Freeman acknowledges she felt it as a writer too – every time Freeman brought up a film in the book, I immediately wanted to go and watch it. So if you’ll excuse me, I’m going to spend the next week in the company of the Ghostbusters, Inigo Montoya, Marty McFly and more.

How I got this book: From the publisher, Fourth Estate. This did not affect my review.