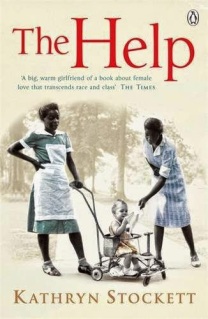 It’s rare that I see a film adaptation of a book before reading the original text, and rarer still that I think the film is as good as the book, but in the case of Kathryn Stockett’s The Help, both things are true.

In Jackson, Mississippi in 1962, it seems like nothing is going to change anytime soon. Black maids Aibileen and Minny run the households they work in, bringing up their employers’ children, cooking the food that feeds their employers’ husbands, and getting absolutely no respect, love or kindness for what they do. Meanwhile, home from college, Skeeter wants to know why her favourite maid has disappeared, and wants to pursue her dream of becoming a journalist. When Skeeter comes up with an idea for a book, she needs to get Aibileen and Minny on board, and together the three of them reveal truths that have stayed behind the doors of Southern houses for a long time.
The Help is a story that touches on two huge issues – race and feminism. While the major milestones of the battle for civil rights are well known, Stockett chooses to focus on the everyday battles black people, particularly women, faced in a segregated society. We get a glimpse, albeit fictionalised, into the very real divide that existed in every aspect of life in Mississsippi in 1962. While Aibileen and Minny carry out the roles of mother, guardian and servant, they hold no power, constantly in fear of being sacked for the slightest perceived infringement.
As women, Aibileen and Minny are even worse off than the men in their lives, even though Minny’s husband is really a good-for-nothing. And it’s not just Aibileen and Minny who are done down because of their gender, Skeeter is too, although of course being white her problems are a bit different. Skeeter is fiercely independent, trying to find a way to succeed in a man’s career while also fighting against her mother’s old fashioned values. Ultimately though, she has freedoms Aibileen and Minny don’t have, although Stockett doesn’t minimise any of the women’s problems.
Love, another big idea, plays a massive part in The Help, with Aibileen’s love for her ‘adopted children’ shining through in all that she does, and her sadness at the changes in attitude they undergo as they grow up heartbreaking to read about. Minny’s love for her family and friends, and ultimately for the woman she works for, is hard won but fiercely given once earned. And Skeeter gets an almost conventional love story, although the way her romance with Stuart plays out is unusual, completely in character for Skeeter, and wins my approval.
For all its addressing of big ideas, The Help is easy to follow and very readable. I adapted easily to the dialects used by Aibileen, Minny and Skeeter, and could easily switch between the three women’s stories because of the differences in the way they spoke. And for all its seriousness, it really works because of the moments of humour, and the humanity threaded through it. The Help isn’t a replacement for non-fiction, but it’s a touching introduction to the personal battle for racial, and gender, equality.
How I got this book: Present via Ninja Book Swap.