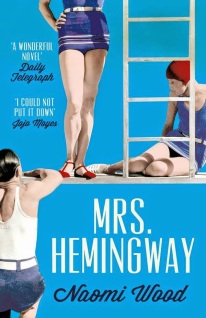 Is talent, a gregarious personality and a way with words enough to make someone who is completely self-obsessed and occasionally violent attractive? I would say no, but Hadley, Fife, Martha and Mary – the four wives of Ernest Hemingway – might have had a slightly different answer.

In Mrs Hemingway, Naomi Wood paints a portrait of the four women who Hemingway married during his lifetime, although they were far from the only four women he had relationships with. Taking in Chicago in 1920, through a hazy, hot summer in the south of France in 1926, and visiting a number of locations and times before heading to autumn in Idaho in 1961, we meet fictionalised (although very well researched and based on reality) versions of Hadley, Fife, Martha and Mary before they know Hemingway, as they turn from lovers to wives, and as Ernest leaves them.

Wood’s magic in Mrs Hemingway involves turning Fife, Martha and Mary – all of whom have affairs with Hemingway while he is married – into likeable characters. And Wood casts a further spell by making all four women sympathetic instead of pitiable. As a reader, I could so easily have spent the entire time I was reading wanting to shake all the women for being utterly stupid. Instead, thanks to Wood, I didn’t think any of them were silly – they all deeply love Hemingway, in spite of clearly being able to see his faults. Each of them knows what they’re getting when they get involved with him. Even Hadley, the first Mrs Hemingway, can see how her husband dazzles people.

While I couldn’t fully see what each woman saw in Hemingway – and I kind of think that’s the point, there was clearly something about him in person that worked that perhaps remains a bit more vague on the page – I could see what he saw in them. Hadley, Fife, Martha and Mary are all incredible women, in very, very different ways. Hadley is strong beyond imagining, putting up with her best friend stealing her man, then still remaining friends with her, and then finding happiness with another man in the way that she never could with Hemingway. Fife is passionate and vivacious and so intelligent, and yet she is the woman damaged most by Hemingway’s betrayal. Martha is clever and independent, forging a career in a male dominated path. And Mary is full of love, supportive of a husband becoming increasingly lost to her.

Why these brilliant women fall so deeply for Hemingway, I usually couldn’t work out, but sometimes there are glimpses of Hemingway’s charm – his talent is obviously a big selling point, as is his forceful personality which could probably charm just about anyone for at least a little while. But he also fulfils the stereotype of a writer as selfish, and he soon reveals himself to be insecure and prone to moods, some of which see him lash out (how much of that is Hemingway, and how much of that is depression is difficult to tell). The dichotomy Wood presents made me simultaneously hate Hemingway, yet also feel sorry for him in a way that I never did with his wives.

I often think the mark of a great book that fictionalises history is how much it makes you want to go away after reading and find out more about the real people and places on the page. Mrs Hemingway has me immediately making reading lists of non-fiction, and going away to search online for little tidbits about Hadley, Fife, Martha and Mary, who by the end of Mrs Hemingway felt like friends. So colour this one a success.

How I got this book: From the publisher, Picador. This did not affect my review.