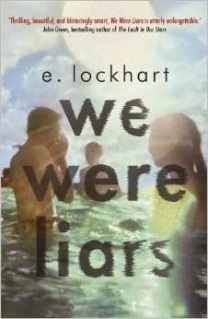 I love a good story about privileged American teenagers as much as the next pop culture obsessed millennial (hello, Gossip Girl) but E. Lockhart’s We Were Liars, a haunting tale of a young girl coming to terms with tragedy, is a different kettle of fish to tales of teenagers having expensive parties and fighting with their BFFs.

Cadence Sinclair Eastman is part of the distinguished Sinclair family. Every summer the Sinclairs, headed by Cadence’s grandfather Harris, gather at their private island off the coast of Massachusets. With her cousins Mirren and Johnny, and Johnny’s sort-of stepbrother Gat, Cadence leads a decadent lifestyle, running riot on the beach at Beechwood Island without a care in the world, part of the self-titled Liars. But then Cadence is involved in an accident, one that leaves her suffering physical and mental pain, and has to come to terms with what has happened to her and the effects it’s had on her family.
We Were Liars doesn’t quickly tell you what has happened to Cadence, instead the story unravels slowly, like a rope whose separate strands are fraying and coming apart, and it’s only towards the end you realise the rope is completely broken. I enjoyed the slow reveal – it gave me time to try and work out what was going wrong, to try and figure out why certain things (events, phrases, people) unsettled me so much.
Lockhart has a  way with language, using it to wound Cadence and the reader as much as Cadence’s accident wounds her. I knew I was in for a beautifully written book in the second chapter, where Candence describes her father leaving her and her mum, and follows his packing of the car with this:

“Then he pulled out a handgun and shot me in the chest. I was standing on the lawn and I fell. The bullet hole opened wide and my heart rolled out of my rib cage and down into a flower bed. Blood gushed rhythmically from my open wound,
then from my eyes,
my ears,
my mouth.
It tasted like salt and failure. The bright red shame of being unloved soaked the grass in front of our house, the bricks of the oath, the steps to the porch. My heart spasmed among the peonies like trout.”

And that’s just in chapter two. That passage made my heart stop, with its brilliant, stunning prose, which is what makes We Were Liars, a book which takes place from one girl’s point of view and in which not a lot happens, so compelling.
Were it not for the wonderful writing, We Were Liars probably wouldn’t be as good a read as it is. As I said, not an awful lot happens – it’s a mystery in which the big reveal isn’t preceded by lots of red herrings and fake outs, just lots of wondering. I was a little surprised when I got to the end, but not too much. I just thought: ‘Oh, that makes sense.’
Still, We Were Liars is a stunning piece of fiction, memorable for Lockhart’s skill with turning words into pictures that stop you in your tracks. Let yourself be swept away onto an island of Lockhart’s words, which, trust me, is better than Beechwood Island any day.
How I got this book: Borrowed from a friend.