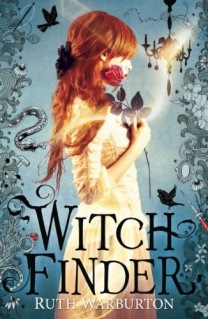 Luke Lexton’s parents were killed by witches when he was a young boy. On his 18th birthday Luke is finally inducted into a guild of men sworn to kill all witches. There, he picks the name of Rosa Greenwood, and must kill her within a month, or else he himself will be killed.

Witch Finder‘s premise of good vs evil, non-witches vs witches, is not a new one, but the way Warburton handles it is unique, and also full of emotion. Luke and Rosa are both great characters who elicit our sympathy and who I really liked, and both were tough as well as kind, principled as well as headstrong. I love that Warburton created a realistic male character in a story with supernatural elements and romantic overtones, and that both Luke and Rosa developed into their roles as the “heroes” of the novel over the course of the book.

Where Witch Finder gets even better is with its baddies, who are really, really scary. Rosa’s brother Alexis is a nasty piece of work – you just know that as a child he ripped the wings off helpless butterflies. And Sebastian, goodness, Sebastian is just evil all over, but knows how to wield his power to seduce people – even Rosa finds herself falling for his charms very occasionally.

This may be a story about witches, but it also deals with lots of very serious, very human issues. Family relationships are explored extensively, particularly through Rosa’s family. Her cruel brother and mother raise the question of nature vs nurture, and it seems like Rosa is a product of both (although her now-dead kind father seems to have influenced her on the nurture side). And there are also mentions of domestic violence – Sebastian is violent and cruel towards Rosa in more than one way. And finally, Rosa herself is not entirely innocent – she does something to Luke which raises huge moral questions, but is of course doing it for the greater good – does that make it okay?

Witch Finder is a great book about the supernatural, but it also has many, many layers. I read it once, and then went straight back through to read various bits again, getting more out of them the second time and understanding the characters even better. Lucky for me the sequel, Witch Hunt, is out soon, so it’s not too long before I get to immerse myself in the world of Rosa and Luke again.

How I got this book: From a friend