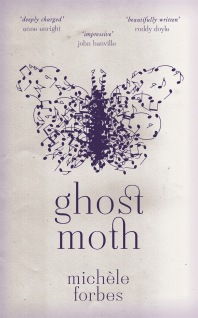 The first thing to note about Ghost Moth is its absolutely beautiful, deceptively simple cover. I know you shouldn’t judge a book by its cover, but in this case, you just can’t help it.

On a white background is a shiny blue moth. But not just any moth, look closer, and you’ll see the moth on the cover is made out of music notes.

The image on the front reflects what’s inside – look more closely at each sentence and word, and you’ll see so much more than you do at first glance.

On a trip to the beach with her family in Nothern Ireland of 1969, Katherine encounters a seal in the water who she fears may be her undoing. After staring what could have been death in the face, Katherine finds herself remembering her past – the equally hot summer of 1949 when, while seeing reliable, devoted George, she meets tailor Tom McKinley, who ignites a passion within her.

Ghost Moth flits between the two summers of 1949 and 1969, as Katherine’s story is unveiled, and in some cases, unraveled. At its core, Ghost Moth is a love story – not just the love between a man and a woman, but also the love between family as well. Central to the narrative of 1969 is Katherine’s family – her three daughters and her son, and her husband – and it’s those relationships that really make the book so appealing.

Forbes took Ghost Moth in completely unexpected directions, but they all worked, perhaps because despite their hugeness everything happened is part of ordinary life and death. I would have liked to have seen and heard more about Northern Ireland of 1969, whose events make the plot of the story hang much heavier and take on much more significance, but Forbes was probably right to concentrate on Katherine’s family and let the other events form part of the background.

In addition, Forbes’ writing is exquisite. Everything you read is suffused through with meaning. From the opening scene of Katherine staring the seal in the face to the very end with Elsa, there is a hidden depth to everything. It’s difficult to believe this is a debut novel – Forbes seems like she’s an old pro at the form.

For those who want to see how a novel should be done, Ghost Moth is a worthy read. It’s as good inside as the cover makes it look.

How I got this book: From the publisher, Weidenfeld & Nicolson. This did not affect my review.