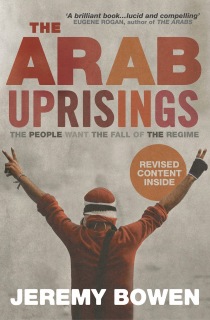 During 2011 it was difficult to switch on the news without seeing an item about protests and demonstrations against a leader in Africa or the Arabic world. Even now, unrest in Syria, where a civil war is under way, still hits the headlines regularly.

Reporting on the Arab uprisings, as they were called, was the BBC’s Middle East Editor Jeremy Bowen. In The Arab Uprisings: The People Want the Fall of the Regime, he gathers together information gleaned from his reports into a book chronicling what happened in the region.

Given that there is no sign of peace yet – Syria is still in the midst of a battle, Egypt has removed its democratically elected leader, Tunisia is to hold elections later this year – the events of this book already seem like distant history.

Bowen traces the beginnings of the unrest, not just the self-immolation of Muhammad Bouazizi in Tunisia in December 2010, but also the wider political and economical situation in the region which led people to feel unhappy with their governments.

We also get insights into how the media works when it reports on conflict, from the struggles of getting visas to the cooperation with regimes who want to hide certain parts of their country. Bowen recounts interviews with Libya’s Muammar al-Gaddafi (arranged by the late Marie Colvin) and Syria’s Bashar Assad and gives an insight into both men, as well as looking at why Russia and China won’t offer support for intervention.

However, while at the core of this book lurked an interesting concept, mostly it was a dense read which largely recounted everything that I’d already seen on television or read in newspapers or online or seen discussed on social media.

As a journalist working in the medium of television, I expected Bowen’s book to be a little livelier and more engaging, but it seems that being given the option to get across a story in more than a two minute time slot led to a lot of overwriting, which made this book a hard slog. There is constant repetition, particularly in the first half of the book – at times it’s like Bowen has forgotten he’s written a phrase just 200 words before. The slogan ‘the people want the fall of the regime’ is oft-explained and repeated in the first few chapters, as if it’s a scientific concept that most people would find difficult to grasp.

There are also some really interesting aspects that are just completely ignored. For example, Bowen mentions an American woman called Jackie Frazier, who is the assistant to one of Gaddafi’s sons, Saadi al-Gaddafi. Hang on a second, what’s her story? How did she find herself working for the son of a military dictator? Bowen has clearly spoken to her, or has some sort of connection, so why is she nothing more than a passing reference?

The Arab Uprisings is at its most interesting when Bowen is telling stories about specific, everyday people he meets, regardless of which side – regime or rebel – of the conflict they are on, or when we see extracts from Bowen’s diaries that he wrote while in Libya or Syria and so on. Unfortunately, these are few and far between. Instead, the book is a repeat of everything that someone with an interest in current affairs would know (anyone not with an interest would put this book down within the first few pages), and one that misses the opportunity to have an authority on the area, a journalist with years of experience in the Middle East, give some real analysis of a charged situation.

How I got this book: Borrowed from the library