Skip to content
Best Book You Read In 2013? (If you have to cheat — you can break it down by genre if you want or 2013 release vs. backlist) – See more at: http://www.perpetualpageturner.com/2013/12/4th-annual-end-of-year-book-survey-2013-edition.html#sthash.PHIkSvGg.dpuf 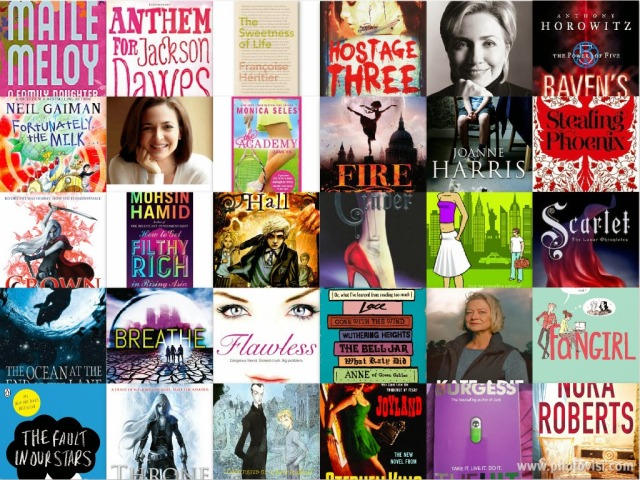 1. Best book you read In 2013? (If you have to cheat — you can break it down by genre if you want or 2013 release vs. backlist.)
This is really difficult, since I read so many great books. I’m not going to pick just one, because there’s no way I can do that, so, in no particular order…
The Fault in Our Stars by John Green
Fangirl by Rainbow Rowell
Eleanor & Park by Rainbow Rowell
Gone Girl by Gillian Flynn

2. Book you were excited about and thought you were going to love more but didn’t?
Ooh, these questions are so difficult (and I’m only on the second one). I guess I’ll put down The River of No Return by Bee Ridgway, which I still haven’t finished. I was super excited when I started it, but lost heart half way through (it is a huge book though).

3. Most surprising (in a good way!) book of 2013?
Scarlet by Marissa Meyer. I loved Cinder, but sequels can be disappointing more often than not, so imagine my surprise when I discovered that not only did I think Scarlet was as good as Cinder, I thought it was better.

4. Book you read in 2013 that you recommended to people most in 2013?
Fangirl and Eleanor & Park, or Throne of Glass by Sarah J. Maas ahead of the release of Crown of Midnight.

5. Best series you discovered in 2013?
The Throne of Glass series by Sarah J. Maas. I adore it.

6. Favorite new author you discovered in 2013?
Hands down Rainbow Rowell, and she was a very late discovery. I only got my hands on Eleanor & Park in November, and read Fangirl in December. I loved them both.

7. Best book that was out of your comfort zone or was a new genre for you?
I’ve read non-fiction before, but I made a concerted effort to read a lot more this year, which wasn’t always easy, but I’m proud of myself for completing that challenge, and I did manage to read some great books because of it that I wouldn’t ordinarily have picked up. And, not a genre, but I read my first Agatha Christie book at the end of December, and absolutely loved it. I’ll definitely be reading more of her work.

8. Most thrilling, unputdownable book in 2013?
Fiction – Gone Girl. I was hooked when I was reading it, and thinking and theorising about it when I wasn’t.
Non-fiction – The Siege, Three Days of Terror Inside the Taj by Adrian Levy and Cathy Scott-Clark, which I just could not let go of.

9. Book you read in 2013 that you are most likely to re-read next year?
I’m not a huge re-reader, apart from a select few books, but I’ll probably re-read The Fault in Our Stars before the film comes out (is that next year?). 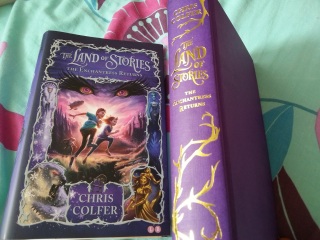 10. Favorite cover of a book you read in 2013?
Chris Colfer’s The Land of Stories: The Enchantress Returns not only has a gorgeous dust jacket, it also has a beautiful spine hidden underneath.

12. Most beautifully written book read in 2013?
The Fault in Our Stars (I’m aware I’m putting this down for a lot of answers).

13. Book that had the greatest impact on you in 2013?
Fiction – Fangirl by Rainbow Rowell. It sounds cheesy, but this book spoke to me.
Non-fiction – Lean In – Women, Work and the Will to Lead by Sheryl Sandberg, which had me wanting to smash glass ceilings everywhere.

14. Book you can’t believe you waited UNTIL 2013 to finally read?
Three answers for this. The first two are Gone Girl and The Fault in Our Stars, which I owned for almost a year before I finally read them. And the third answer is The Body in the Library by Agatha Christie.

15. Favorite Passage/Quote From A Book You Read In 2013?
Oh, I’m not sure about this one. Something I do need to start doing again is writing down my favourite quotes so I can remember them.

16.Shortest and longest books you read in 2013?
Shortest – Neil Gaiman’s The Ocean at the End of the Lane.
Longest – Chris Colfer’s The Land of Stories: The Enchantress Returns.

17. Book that had a scene in it that had you reeling and dying to talk to somebody about (a WTF moment, an epic revelation, a steamy kiss, etc, etc)? Be careful of spoilers!
Gone Girl – the whole second half was one giant WTF moment.

18. Favorite relationship from a book you read in 2013 (be it romantic, friendship, etc)?
Augustus and Hazel from The Fault in Our Stars.

19. Favorite book you read in 2013 from an author you’ve read previously?
Probably Neil Gaiman’s The Ocean at the End of the Lane, which I didn’t understand fully, but I did enjoy.

20. Best book you read in 2013 that you read based SOLELY on a recommendation from somebody else?
Hmm, I try not to let other people influence me too much, since that means my expectations get too high. I guess I’d say The Body in the Library by Agatha Christie. Although that book wasn’t recommended to me, Vicky over at Books, Biscuits and Tea did say I should give Christie a try.

22. Newest fictional crush from a book you read in 2013?
Levi from Fangirl, Augustus from The Fault in Our Stars.

24. Most vivid world/imagery in a book you read in 2013?
The Ocean at the End of the Lane by Neil Gaiman had some pretty scary and well-formed evil parts in it, and the descriptions Gaiman gave meant I could picture that world pretty well.

25. Book that was the most fun to read in 2013?
Very British Problems by Rob Temple had me laughing constantly.

26. Book that made you cry or nearly cry in 2013?
Although I loved Fangirl more, Rainbow Rowell’s Eleanor & Park had me in buckets.

27. Book you read in 2013 that you think got overlooked this year or when it came out?
I really loved Sarah Crossan’s Breathe and Resist, which I don’t think many people know about. It’s a brilliant pair of books set in a dystopian world where there’s hardly any natural oxygen and people live in pods. Crossan’s characters are brilliant, and the books are quite dark. I really think more people need to read them, and since there’s only two, the series is not a huge time commitment.

1. New favorite book blog you discovered in 2013?
I discovered all the book blogs I follow in 2013, since this is my first year seriously book blogging. I guess if I had to pick a few I’d say Books, Biscuits and Tea, The Broke and the Bookish, Natflix and Books, A Bookish Heart and Between My Lines, but I love you all!

2. Favorite review that you wrote in 2013?
I think my review for Fangirl by Rainbow Rowell, although I desperately wanted to write masses more. If I was a student now, I’d write an essay on this book.

3. Best discussion you had on your blog?
I don’t host discussions, maybe something for next year.

4. Most thought-provoking review or discussion you read on somebody else’s blog?
Too difficult to answer. I’ve read lots of great posts this year, and enjoyed them all.

5. Best event that you participated in (author signings, festivals, virtual events, memes, etc)?
Hmm, I only started seriously book blogging this year, so I haven’t participated in much. Asti’s (A Bookish Heart) Bookish Games were really good fun, although I didn’t survive for long!

6. Best moment of book blogging/your book life in 2013?
Getting to interact with authors on Twitter, and seeing them recommend my reviews or just say thanks for reading their books.

7. Most popular post this year on your blog (whether it be by comments or views)?
My review of Chris Colfer’s The Land of Stories: The Enchantress Returns has become my most read post ever, not just for this year.

8. Post you wished got a little more love?
The My Week in Books feature that I do (which really needs a better name). The point of the feature is to share things about books and blogging that I’ve found, so it would be lovely if more people saw the posts.

10.  Did you complete any reading challenges or goals that you had set for yourself at the beginning of this year?
Yes! I managed my goal of reading 12 non-fiction books in 2013. You can find the full list here.

1. One book you didn’t get to in 2013 but will be your number 1 priority in 2014?
I can’t say they’ll be my number one priority, but I really need to read And the Mountains Echoed by Khaled Hosseini, Inferno by Dan Brown and The Casual Vacancy by J. K. Rowling as soon as possible.

2. Book you are most anticipating for 2014 (non-debut)?
Ooh, a tie between Cress by Marissa Meyer and the third book in the Throne of Glass series by Sarah J. Maas.

3. 2014 debut you are most anticipating?
I have many 2014 debuts on my shelf, but one I’m really intrigued by is The Girl With All the Gifts by M. R. Carey, which looks wonderful and slightly creepy.

4. Series ending you are most anticipating in 2014?
I’m not sure whether any series I’m reading are ending in 2014!

5. One thing you hope to accomplish or do in your reading/blogging in 2014?
Just continue blogging. I haven’t come up with my challenge for 2014 yet, but keep an eye out.