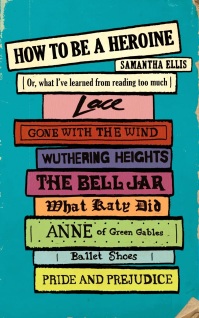 From princesses to witches to Bridget Jones, the fictional women in our lives are numerous and different, and it’s impossible not to take something from our readings of them.

The lessons we learnt from the literary heroines that have littered our lives are what Samantha Ellis examines in her brilliant book How To Be A Heroine: Or, what I’ve learned from reading too much. Part autobiography, part examination of the portrayal of women in literature, How To Be A Heroine is an extraordinary read which had me constantly wanting to go back and read the books of my childhood and teenage years (and beyond).

Following an argument with her best friend about who was better – Cathy Earnshaw or Jane Eyre – Ellis decided to reread the books of her past to see if the female characters still held up, all the while looking back on her own life as a Iraqi Jew growing up in London with dreams of becoming a playwright.

Ellis looks back at many of the books I’ve read, and her chapter on Anne of Green Gables is my favourite in the book. Anne was (is) a literary heroine of mine – fearless, clever, a feminist when there wasn’t a word for it. But Ellis discovers that in sequels to L. M. Montgomery’s first book, Anne becomes less of a heroine, in the same way that the March sisters don’t stand up to scrutiny on her rereading of Little Women, Good Wives and Jo’s Boys. Still, I’ll always love Anne Shirley (and I think Ellis will too) – the key is to ignore the sequels!

Other rereadings lead Ellis to discover new things. On revisiting Gone With the Wind Ellis comes to the conclusion that while Scarlett is the obvious heroine, it’s Melanie who is the true heroine of the novel, something which I have to agree with.

There are plenty of familiar characters Ellis revisits – from Elizabeth Bennett to Jane Eyre – that are familiar to me, but there are others who feature who I didn’t read about as a child. One chapter focuses on Valley of the Dolls by Jacqueline Susann, a book that sounds like a mash-up of something written by Jackie Collins AND Danielle Steel AND Jilly Cooper. While Ellis’s examination of it make it sound like its female characters are hardly heroines, it did make me really, really want to read the book.

And of course, in addition to all the fictional females in the book, there is Ellis herself, whose story encompasses love and loss, failure and success. Some of the heroines Ellis rereads stand up to scrutiny, while others don’t, but in the end, it doesn’t really matter if they’re true heroines or not – we can learn something from them all, and we can learn something from Ellis’s story too.

How I got this book: From the publisher, Chatto & Windus

•How To Be A Heroine by Samantha Ellis is released in the UK on January 2, 2014.

•How To Be A Heroine is the ninth book in my challenge to read 12 non-fiction books in 2013.