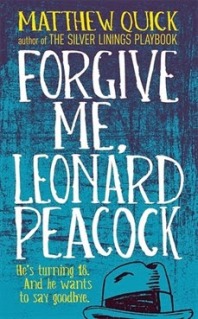 You’ll know Matthew Quick for The Silver Linings Playbook, and Forgive Me, Leonard Peacock is his highly anticipated second novel.

I only recently read The Silver Linings Playbook, and absolutely adored it. Perhaps because of this, Forgive Me, Leonard Peacock didn’t live up to my expectations.

It’s Leonard Peacock’s 18th birthday, and he’s wrapped up for presents for his closest friends – his neighbour, a violin virtuoso, his teacher, and the daughter of a preacher. He’ll give them the presents, and say goodbye.

Forgive Me, Leonard Peacock is told through the eyes of the protagonist, whose inner voice is one I found difficult to be comfortable with. Partially, this is due to the fact that Leonard is a strange character with many problems, but mostly it was to do with Quick’s writing style. For a start, he employed the letter technique he used in The Silver Linings Playbook, only here it was strange and didn’t really add anything to the novel. I didn’t feel like I knew Leonard well enough to work out what the letters were getting at much of the time.

The main problem, and the reason I didn’t want to expend too much time working out the meaning of the letters, is that I just wasn’t absorbed in the novel, and that’s because it’s set out a little like a scientific paper – perhaps because Leonard spends a lot of his time observing people and taking mental notes. In the book, this manifests itself in constant footnotes, which made it hard for me to find a rhythm while reading. Do I read the footnotes as soon as they’re referenced? Do I wait to the end of the sentence they’re referenced in? Do I wait to the end of the page or chapter? Or do I just ignore them altogether? I went for the first option, but the constant stop/start meant it was more than three quarters of the way through the book before I started enjoying the novel, and that was only because of the BIG REVEAL.

Quick is good at keeping you guessing. I tried constantly to work out what led Leonard to his actions in the novel, and none of my guesses were accurate, even though a couple came close. When the moment came, I was a little stunned, and despite having been reluctantly picking up the novel over a couple of weeks, I suddenly found myself enthralled and intrigued as to what would come next. However, even though Quick reveals what’s wrong with Leonard, there’s never a workable solution given to his problems, and that bugged me. There were perhaps allusions to it, but none of them were satisfying.

How I got this book: Borrowed from the library