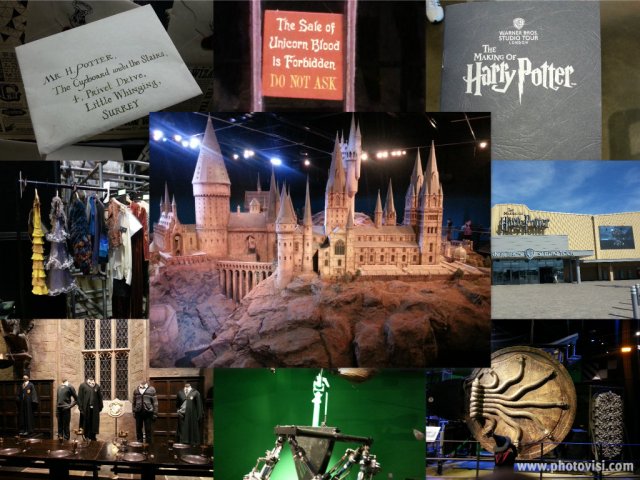 As a self-confessed Potterhead, I’m a little bit embarrassed that it’s taken me so long to visit the Warner Bros. Studio Tour.

Then again, I’m a purist, and don’t love the films (I like them, but there’s no love), so perhaps it’s right that it’s taken me a while. Going on the tour, though, has given me a new appreciation for the films.

Based in the Warner Bros. studios in Leavesden, where much of the interior shots of the Harry Potter films were done, the tour consists of one really massive warehouse, one still quite big warehouse, and an outside bit connecting the two together.

Our tickets were in the first time slot of the day, which was great because the attraction was busy enough to feel lively, but not busy enough that we couldn’t see anything.

While waiting for the doors to open, staff were giving out tour “passports”. When I asked for one, I was told they were just for children, but a moment later the woman I spoke to tapped me on the shoulder and sneakily handed me one – woo! I just wanted it as a souvenir, but I did collect the stamps on the way round the tour, which was fun.

After a short film, we headed into the Great Hall from Hogwarts. The actual Great Hall. It’s set up as though filming will start any minute, and has costumes from the films dotted around the place, including Daniel Radcliffe’s first Hogwarts uniform – it’s tiny.

There’s a guide in the Great Hall who gives you a speech, but after that you’re on your own, which is how I liked it. You can buy digital guides, but save your money and just savour what you’re seeing. If you have questions there’s plenty of information boards around, and all the staff on duty are Potter experts.

The first warehouse is full to the brim with everything from costumes to sets (the Potions classroom is stunning) to props to broomsticks. We took our time taking in things like the boys’ dormitory, Dumbledore’s office and the massive sculpture from the Ministry of Magic in The Deathly Hallows.

We couldn’t resist a go on the broomsticks. While the experience is great – you dress up in robes, sit on a broomstick in front of a green screen and then fly through London – you’re not allowed to take any photos, since the tour wants you to buy their photos of you. It’s disappointing, but the experience was fun. Plus, we took so many photos of everything else (you can see a few of the 200-plus I captured above) we didn’t need to buy the broomstick ones.

One of my favourite parts was the huge cabinet full to the brim with things like copies of The Quibbler and The Daily Prophet, the admission letters to Hogwarts Harry receives and dozens of sweets and products from Weasleys’ Wizard Wheezes. Like everything else in the room, they’re all genuine props from the films.

We then headed outside – make sure you see everything because the tour is forward only, no going back. The outside area includes the external sets for the Hogwarts bridge and Number 4 Privet Drive, as well as the giant chess pieces used in the film, the Knight Bus, and Hagrid’s Motorbike and the Weasleys’ car, all of which provided plenty of great photo opportunities.

Then it was on to the second warehouse, which was much more technical than the first. It included information on all the models made for the production, plus magnificent, detailed architectural drawings of just about everything they ever built. I thought the highlight of the tour was going to be the Diagon Alley set, which is housed in this second warehouse, but it was eclipsed at the last minute by the massive model of Hogwarts, which was used for swooping external shots.

At just over £21 each for me and three children, I thought before going the ticket was pretty expensive, but on reflection it’s well worth the price. However, the tour does make its money in other ways – the most expensive gift shop I’ve ever come across at an attraction (I forked out almost £15 for a notebook), and extortionate prices for pictures of you riding a broomstick in front of a green screen.

If you can keep from spending all your galleons, sickles and knuts in the gift shop, the Warner Bros. Studio Tour is a perfect half day out for any Harry Potter fan.