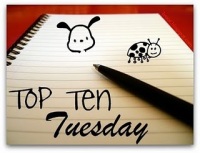 Top Ten Tuesday is an original feature/weekly meme created at The Broke and the Bookish, where the writers, like me, are particularly fond of lists.

This week’s topic is…top 10 books I wish could have had sequels (they were complete stories but you just could have read more and more about these characters or set in that world).

This is a tough one, because lately I’ve been speaking out about how every book nowadays seems to be part of a trilogy or series. I think a lot of great books stand on their own, and don’t need sequels. Therefore, none of the below are books I really, really want to read a full sequel to, but ones where I sometimes wish I’d been able to get a definitive answer on what happened next.

1. I Capture the Castle by Dodie Smith
We’ll start with I Capture the Castle. When I first read it (as a young teenager) I was saddened to find there was no sequel. I felt like I’d been shown a slice of Cassandra Mortmain’s life, and I really wanted to know exactly what happened next. Now, I see why Smith worked that way, but I still want to know more.

2. We Need to Talk About Kevin by Lionel Shriver
This is one of my favourite books, and ends on such a perfect melancholy note. Still, I’d love to ask Shriver what she thought happened next, and how Kevin and his mum dealt with each other.

3. Matilda by Roald Dahl
I’d love to find out what a grown-up Matilda was like. I imagine she set up a school for clever girls, and spent her life making sure all women got an education.

4. The Fault in Our Stars by John Green
Okay, I don’t want a full sequel but five minutes with John Green to find out his headcanon for Hazel would be great.

5. The Hunger Games by Suzanne Collins
The Lord of the Rings series has a huge number of appendices which expand on the history of Middle Earth and events outside the books. I’d like something similar (on a much, much, much smaller scale) for The Hunger Games, where Collins tells us more about the world and how it copes after the Games finish. We get a small glimpse, but since it’s through Katniss’s point of view and she’s out of it, we don’t get much.

6. After Tomorrow by Gillian Cross
I read this recently (review here), and I’m quite happy that there’s not a sequel, because I think the characters I met are just fine. I would like to know from Cross, though, how (if) the world recovers and what’s ahead for Britain in her universe.

7. Never Let Me Go by Kazuo Ishiguro
A beautiful, haunting novel, Never Let Me Go (review here) is pretty much perfect. Sometimes a small part of me wants to know exactly what happened to Kathy though, rather than me being the one to figure it out. I think it would be easier to come to terms with if Ishiguro spelt it out.

8. Neverwhere by Neil Gaiman
I’m a huge fan of Gaiman, and could read more of his worlds anytime. It was a toss up between Neverwhere and Stardust as to what went on this list, and I went for Neverwhere.

9. Gone With the Wind by Margaret Mitchell
There is actually a sequel to this, called Scarlett, and written by someone who’s not Mitchell. I don’t need a full book, I just need to know whether Rhett ever forgives Scarlet and the two get together.

10. Gone Girl by Gillian Flynn
Another book I recently read (review here), Gone Girl‘s ending is jawdropping. I won’t spoil anything, but I’d love to know how the lives of the characters panned out. If you’ve read it, you’ll know what I’m talking about.

What books would you like to see sequels to?