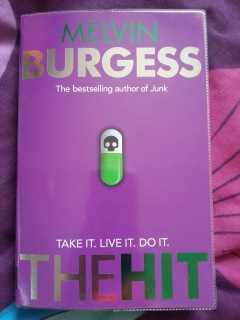 Back when I was in secondary school, around year eight (aged 12 or 13), I read an amazing book called Junk, by Melvin Burgess.

I told everyone I knew about it, and I’m pretty sure I even did a presentation on it for English class.

Fast forward and the other day while perusing the shelves of my local library, I spotted The Hit by the same author. Just like Junk, it’s minimalist, brightly coloured cover drew me in, and its story kept me there.

There’s a new drug out, called Death. You take it, and you get one amazing week to live, and after that, you die. Megastar Jimmy Earle takes the drug and dies on stage at a concert, sparking a revolution in the streets.

Meanwhile, a teenage boy called Adam, who was at Jimmy’s concert, pops a pill after his brother dies and he thinks his girlfriend has dumped him. Taking the pill might seem great at first, but Adam discovers that he has more reason to live than die.

The Hit is dystopian fiction, but there’s none of your hunger games or oxygen-starved societies, this is dystopian fiction that actually has more than a touch of reality to it. Sure, we don’t have a pill that makes you feel superhuman for a week and then makes you drop dead, but there are many other ideas Burgess explores that are relevant to contemporary Britain, and probably to the wider world. Some of what he presents in The Hit doesn’t seem like it’s a world away.

In The Hit Death was invented to give people with long-term health conditions the chance to have one fantastic week before they died – putting control in the hands of people who want to die before they get too ill. The right-to-die argument has been rumbling on in British courtrooms for a while now. In fact, last week, as I was reading this book there was a case at the High Court.

The Hit also references the riots of 2011, which took over London and spread to other cities. They were prompted by a dissatisfaction with the state, among other things, and Burgess takes this and moves it one step further. The Hit features a rebel group called The Zealots, who bill themselves as a group trying to free the people from the government and restore equality – Burgess’s Britain features a very poor poor, and a very rich rich. The Zealots can be seen as terrrorists, but the saying ‘one man’s terrorist is another man’s freedom fighter’ rings true in The Hit.

At its core, though, The Hit is a book about life and love. How much does life matter? What, or who, would you give your life up for? Are there things more important than life? How should you live life?

Those questions, and more, affect the two protagonists in the book, Adam and his girlfriend Lizzie. They’re both interesting characters, because half the time you’re fearing for their lives and urging them to get out of dangerous situations, and half the time you want to slap them silly for being so stupid or selfish. Still, Adam and Lizzie are compelling because of this contrast, and ultimately, whatever they do, they are redeemed at the end of their journey in The Hit.

Just like with Junk, Burgess has created (with the help of Brandon Robshaw and Joe Chislett who submitted the original idea for The Hit) a compelling, thought-provoking novel for contemporary Britain that’s not afraid to shy away from tough issues.