Harry Potter moment of the week is a meme started by Uncorked Thoughts. The aim of this meme is to share with fellow bloggers a character, spell, chapter, object, quote etc. from the books/films/J. K. Rowling herself or anything Potter related.

This week’s topic is…favourite film in the Harry Potter series.

This is a tough one, and not for the reasons you think. It’s because I haven’t seen all of the films yet. I’m in the process of a Great Harry Potter Rewatch, but it’s taken me months and months and months, and so far I’ve only watched five of the six films I’ve seen before – I still haven’t seen The Deathly Hallows.

Mainly, it’s because I love the books so much, and I generally feel that the films haven’t lived up to the world that was created by Rowling in my mind. However, when I think of them related but mostly apart from the books, I actually quite like some of the films.

Therefore, my pick is (and this could change after I eventually watch The Deathly Hallows)…Harry Potter and the Goblet of Fire. 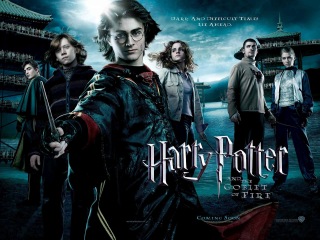 The film is wonderfully acted, both the new additions such as Ralph Fiennes and David Tennant, and the regular cast, who I felt the cast came into their own in Goblet of Fire. It’s full of bleak moments, but also funny ones, and the balance is just right.