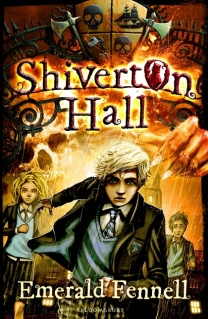 Ghost stories, phantoms and a spooky school with a horrid head teacher – the stuff of nightmares that are at the centre of Emerald Fennell’s creepy Shiverton Hall.

A young adult novel, Shiverton Hall successfully managed to half scare me out of my wits. The fact that I read it at night, tucked in my bed with the wind and rain howling outside, only accounts for a very small part of why this novel gave me the heebie jeebies.

Arthur Bannister is unexpectedly offered a place at Shiverton Hall, a boarding school somewhere north of his home in London. A quiet, intelligent boy, he has a secret from his new friends Penny, George and Jake.

But his own worries are forgotten when creepy forces start wreaking havoc at the school, putting the lives of his friends in danger.

Shiverton Hall is partially so successful as a scary novel because at its core is something we all had as children (I’ll keep it vague so as to not spoil it for you).

And Fennell, an actress who had parts in Any Human Heart and Anna Karenina, is also adept at crafting scary tales within the world of Shiverton Hall. Things you can’t see, fears about your own safety, and childhood hopes turning on you all contribute to making you feel apprehensive about what’s coming next, but also make you want to push forward and find out more.

The characters are well-rounded, and Arthur especially is multi-layered. Hints at his story are dropped throughout the novel, but what really happened is far more interesting and nuanced than you could guess at.

Fennell touches on the issue of bullying throughout Shiverton Hall, but if there’s one down side to the novel, it’s that all the bullies in the novel seem to largely get away with what they’re doing. One form of justice is meted out on Arthur’s former bullies, but it’s not the right type of justice – done by adults through appropriate legal systems. However, that is a sign of the reality we live in, so perhaps Fennell decides to be purposefully vague.

Shiverton Hall is that rare thing – a story for both boys and girls. A bit like the Harry Potter series, there is something for both sexes to enjoy.

The novel ends as though there‘s a sequel to come – I’m not sure if this is the case or not, but it’s a good enough book to warrant one. If Fennell can keep up the scare factor, I’ll definitely be reading again – though this time with the lights on and the sun shining outside.