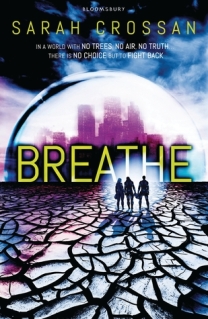 Young adult fiction is enjoying a resurgence, thanks to the popularity of series like Twilight and The Hunger Games, but just because they’re the big names doesn’t mean there isn’t other quality fiction out there.

I stumbled across Sarah Crossan’s Breathe thanks to a publisher friend, and read the book in just a couple of sittings.

A dystopian novel, Breathe is set in a world where all trees and plant life has disappeared, and the lucky few live in Pods. Everyone else slowly suffocated to death. When the fundamental right to breathe has disappeared, where does that leave society?

In this world, like any other where society is split into haves and have-nots, there grows a rebel group. Among them is 16-year-old Alina, who is forced to escape the Pod when a friend of hers is seemingly killed by officials.

Alina manages to get out of the Pod with Quinn, a Premium who is infatuated with her, and Bea, his auxillary friend, who are going on a camping trip into the outside world. Armed with just a couple of days worth of oxygen each, Quinn and Bea soon find themselves introduced to a world they never knew existed.

Chapters alternate between Quinn, Bea and Alina’s points of view, so we get to know all three characters quite well. The character I most liked was Bea, who was compassionate and kind, as well as being tough.

Alina and Quinn are both slightly selfish, and slightly clueless, and occasionally I found myself wanting to shake some sense into them both.

The world outside the Pod is well crafted, although we barely get to see the rebel stronghold, and secondary characters including Alina’s cousin Silas, Quinn’s father, and drifter Maude are rounded individuals. Rebel leader Petra is scary, although not quite as terrifying as her nine-year-old protege and surrogate daughter Jazz.

On the down side, I found the central love story of Breathe a little clumsily handled, and it was resolved far too quickly, and not in a very satisfactory manner.

Comparisons to The Hunger Games will be inevitable, although it’s difficult to say whether Alina or Quinn is Katniss, but Bea is definitely Peter. Breathe, bravely, doesn’t have a happy ending, leaving readers fully prepped for its sequel, whereas The Hunger Games could be read as an isolated book. If I was going to pick a book to compare Breathe to, it would be Tomorrow When the War Began by John Marsden, a dystopian novel I read years and years ago. It was the first in a series, and I never got round to reading the others to find out what happened – I won’t be making the same mistake with Breathe.