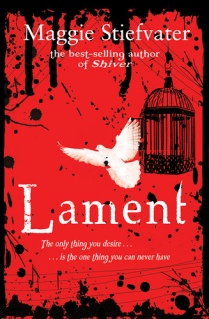 Having previously read Maggie Stiefvater’s Shiver trilogy, I was looking forward to Lament, the first in her Faerie books, and thought I knew what to expect.

Where Shiver and its sequels Linger and Forever were slow builds with mysteries which unravelled piece by piece, Lament was a much faster-moving book, and there was no time at all before I was thrust into the world of faeries and cloverhands.

Lament starts with Deirdre Monaghan about to take part in a music competition. As usual, she is throwing up before she goes on stage, but this time, unusually, a beautiful boy comes to her aid, and then persuades her to perform with him.

Within just a few pages Deirdre finds herself forging a deep connection with Luke, and she knows there’s something weird about him.

At the same time she keeps finding four-leafed clovers everywhere, and it’s not long before Luke tells her she’s a cloverhand – someone who can see faeries. Luke is not all he seems, and Deirdre’s grandmother is the first to warn her away from him, saying he is a bad faerie.

Dealing with a controlling mum and a crazy, definitely evil aunt, Deirdre finds herself getting deeper and deeper into the world of faerie as her relationship with Luke continues, leading to her best friend James getting into a dangerous situation.

Stiefvater has a real talent for making readers feel the emotions of her characters, and we feel Deirdre’s anger, sadness, frustration and confusion throughout the book. Stiefvater is also great at portraying love of all kinds – between friends, family and lovers – and, like in the Shiver series, her portrayal of Deirdre and Luke falling for each other is completely realistic (putting the supernatural element to one side).

However, I did think that Deirdre was just too accepting of the world of faerie. She knows immediately there is something unusual about Luke, and about some otherworldly not-so-nice people she meets, but every time something new is revealed she accepts it without question or angst.

And I found her reaction to something that happened to her grandmother unrealistic and lacking the emotion I thought it would. On the other hand, she was full of emotion when James got caught up in the games of the faeries.

I would have liked to have found out more about Deirdre’s aunt, who made me uneasy from the start, but I think Stiefvater was clever in just showing us glimpses of Deirdre‘s family. And I definitely wanted to know more about best friend James, but there is a sequel already which focuses on him. Lucky for Stiefvater, I found Lament intriguing enough that I’ll be reading Ballad.