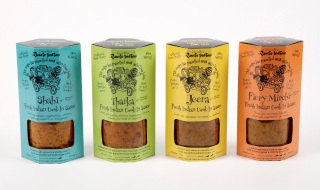 Being of Pakistani origin, I’ve made one or two curries in my life.

Some of the recipes I use are ones my mother taught me, others are from the “add a little of this and a little of that and see what happens” school of cooking.

Whichever method I choose, my curries generally tend to take a while to make, since the flavours of the sauce have to meld together perfectly.

So it was with more than a little scepticism that I read Rustic Indian curry sauces could give you a great curry in as little as 10 minutes. Seriously?

Created by husband and wife team Bal and Vini, the range came about when the couple decided to recreate the recipes passed down through their families for the mass market.

The four sauces in the range – Tharka, Jeera, Shahi and Fiery Mirchi – can all be used for vegetable, meat or fish curries, are chilled, use fresh, natural ingredients and have a shelf life of 12 weeks.

I started with Tharka, and decided to make a chickpea and black-eyed bean curry. The sauce went in a pan, as did a 400g tin of chickpeas and another of black-eyed beans. Sure enough, 10 minutes later, after letting the sauce simmer for a while and stirring occasionally, I had what looked like a great curry. It tasted pretty good as well, although there was something in there I couldn’t quite place that I don’t usually use in my curries – maybe the fenugreek?

For my second go, I made a lamb curry using Fiery Mirchi, which is the spiciest of the sauces in the range. I decided to tenderise the lamb first, cooking it in stock with some garlic for a while, before drying out the liquid and adding the Fiery Mirchi sauce. Because it was meat, I decided to simmer the whole thing on the hob for aorund half an hour, adding a bit of water as I deemed necessary.

Again, the curry looked good, and it was tasty as well, although not quite as spicy as the packaging led me to believe. Still, I can take a little more chilli than most people I know, and someone who doesn’t eat much spicy food would definitely have found the curry pleasantly hot. The flavours of the Fiery Mirchi sauce were much closer to the curries I usually cook myself, and I found myself really enjoying the whole meal.

There are two other flavours in the range which I haven’t had the chance to try out yet, but which I will definitely be using. While there’s nothing quite like making your own curry, if you’re short of time then Rustic Indian curry sauces are close enough to home-cooked curries to be a satisfying substitute. They’re easy to use, take away the most time-consuming bit of making a curry (creating the right sauce), are fresh, you can whip up a meal in minutes with them, and most importantly, they’re tasty.