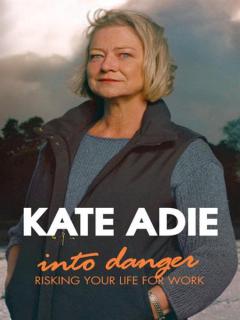 First up in my challenge to read 12 non-fiction books in 2013 is Kate Adie’s Into Danger.

Adie is a journalist I really admire, and I’ve previously read The Kindness of Strangers, which is her autobiography.

Into Danger is a little different, in that while it’s about things she may have seen during her career, or people she met, it’s not about her.

The book could be described as 17 non-fiction short stories, each focusing on a different “dangerous” career, from snake venom collector to armed robber to bodyguard to prostitute.

In some cases Adie provides a lot of narration, using her own experiences and research to help flesh out the careers she is talking about. These are the stronger chapters. Other times, Adie lets those she is interviewing just talk, and their words are printed for pages without any interruption. While compelling, I found these stories slightly less believeable, although, of course, they’re all true.

There were a few chapters that really stood out for me. One of Adie’s chosen dangerous careers is the diver, and for this chapter she interviewed two people, one of whom – Gie Couwenbergh – helped rescue people from the Herald of Free Enterprise when she capsized off the coast of Zeebrugge in 1987. The story of the Herald is one I know quite well (the first paper I worked for had a sister paper which covered every aspect of the tragedy, as many of those who died were from that area), but Adie’s approach showed me a new angle. The chapter was well crafted, with details about the work of divers from the eyes of two people, an exploration of the mental toughness of someone who chooses a career spent underwater, and of course the telling of how a diver can help save lives.

Another story that really stood out for me was that of Brian McCargo, whose career as an Ulster Policeman started on Bloody Sunday. McCargo’s story was compelling, but very matter of fact – yes, there were threats on his life and that of his family, but he also felt a sense of service towards the community, and that was why he stayed in policing.

In every interview, printed at the end of each chapter, Adie asked her subjects one last question about their career: “In the name of what?” The answers given for chosen careers vary, and encompass everything from adventure to duty to enjoyment. It’s these answers that I find the most interesting parts of the book – after reading about the danger people put themselves in, intentionally and unintentionally, for their work, I was really curious to get to the why.

Adie herself has encountered danger in her career, but she brushes this off right at the beginning, assuring us that while journalists may encounter danger, they “don’t necessarily have to face it, deal with it or rid the world of it”.

“But who are the people who do?” Adie asks. Adie’s mission with Into Danger to find those who do was successful.