Hello boyband that should have been around in the 1990s, thy name is It Boys!

Yes, you read that right – It Boys! With the exclamation mark. This five-piece American boyband’s debut album, Introduction, transports me back 15 years to a time when (mostly American) boybands ruled the land (okay, just the airwaves). Think Backstreet Boys. Think N Sync.

Let’s just go through the boyband rule book and see if It Boys! meet the criteria:

Introduction is typical first-album-from-a-boyband fare from the beginning, with plenty of upbeat tunes, lots of that weird echo/singing in a cave effect that boybands like, and some guest vocals by people you’ve not yet heard of (and perhaps never will).

I may sound quite harsh up to now, but that’s probably because I’m way past my boyband phase and this album is just too teenybopper for me.

However, Introduction is fun to listen to, if only because it reminds me of when I was younger. If I was 13 right now, I’d probably think It Boys! were amazing.

As it is, most of the songs just make me laugh – Guys Don’t Like Me, the band’s debut UK single, features the lyrics:

There are plenty of upbeat tunes, from the opener Start the Party, to Spring Break Up (I think this is a play on words about breaking up with someone during the American holiday spring break, but I’m not sure), to the final track Burning Up, featuring Jeffree Star and Lacey Schwimmer, the latter of whom was a professional dancer on Dancing With the Stars, America’s version of Strictly Come Dancing. 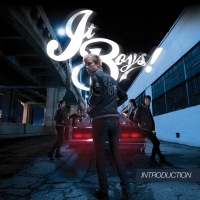 What is missing is a good boyband ballad. And really, what kind of boyband are you without a mournful ballad where every member gets a turn to sound heartbroken on the vocals? Even the one that isn’t usually allowed to sing.

Introduction may be slightly “rockier” than some of the earlier stuff released by popular American boybands in the 1990s, but it’s about the same level of rocky as those same bands later work. If you travelled back to 1998 with this album, no one would bat an eyelid at how different it sounded from all the other boybands around then, because it doesn’t sound different.

Teen girls who love The Wanted and One Direction (two bands I am now too old to understand the attraction to) will love It Boys! but for those of us past the days of screaming over boys with floppy hair, passable vocal ability and a talent for looking moody, this isn’t anything to get excited about. Now, Backstreet’s Back, that was a great boyband album…