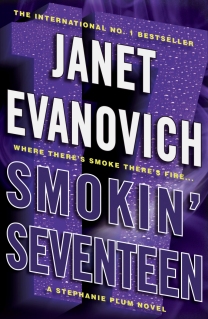 Book nine in my challenge to read one book (I haven’t read before) a fortnight in 2012 is Smokin’ Seventeen by Janet Evanovich.
If you’ve never read anything by Evanovich, what book phobic rock have you been hiding under? Okay, probably there’s plenty of people out there who have never read anything by Evanovich, but you all should be.
Smokin’ Seventeen is the (unsurprisingly) 17th book in the Stephanie Plum series. The first (One for the Money) was made into a film with Katherine Heigl as Stephanie, but I’m not sure it was a very good film.
Here’s the down low on Stephanie – she lives in New Jersey. Her husband cheated on her with her worst enemy and she’s now divorced, living in a flat with her hamster Rex. She works for her cousin Vinnie as a bounty hunter, tracking down people who haven’t answered their bail. Her best friend is Lula, a former prostitute who brings a new meaning to plus size and enjoys squeezing her frame into tight lycra. She hates guns, her cars are always getting destroyed, her grandmother is crazy and her mum wants her to settle down and get a proper job.
Oh, and she can’t decide who she wants to be with – hot cop Joe Morelli or the mysterious Ranger.
In Smokin’ Seventeen someone is leaving dead bodies in the dirt where Stephanie’s office used to be (it burned down). And after the first couple of bodies appear, it’s clear they’re not random, someone’s leaving them for Stephanie.
The tension as the bodies keep appearing builds throughout the novel, although in true Evanovich style there’s plenty of comedy throughout to keep you laughing, which is what I love about this author’s books.
A mass murderer would be enough plot for one book to deal with, but Evanovich deftly weaves in a whole bunch of others – the usual Joe vs Ranger battle (I’m Team Joe), Joe’s crazy grandmother (there’s lots of crazy grandmothers in this Trenton, New Jersey) putting a curse on Stephanie, and Stephanie’s mum trying to set her up with a nice guy to settle down with.
Despite having read 16 previous books featuring Stephanie, I still love Evanovich’s novels and they still feel fresh. They break through genres, this isn’t just chick lit, or comedy, or murder mystery, they’re all three thrown together in a mixer – and what comes out is a pretty appealing smoothie.