So this summer will be filled with sport in London as the Olympics and Paralympics come to town. I’ve seen the Olympic Park in Stratford many times as I’ve driven or got the DLR past, but I’ve now been inside for a look round. Much of it is still a building site, as contractors work on landscaping, temporary venues and screens and a lot of other things, but with the main venues built it’s pretty impressive.

Tours are done by bus, because there’s still so much going on around the site that it’s not safe to walk around unless you’re wearing a hard hat, steel toe capped boots and a fluorescent jacket. I don’t look good in any of those, so I stuck with the bus and our tour guide Layla, who works for the London Legacy Development Corportation, which will be in charge of the future of the Park (to be renamed the Queen Elizabeth Olympic Park) once all the athletes have gone home and the strains of the national anthems have stopped sounding.

To enter the Olympic Park on the tours the bus goes through a small tunnel, and on coming out the other side there’s a partial view of the Olympic Stadium, the most easy to recognise building in the park. When the park opens for the Games all the road signs you can see will be gone, as will the concrete slabs, and the grit on the floor will actually be landscaped – I’m not sure if it will be a hard surface or grass.

This is the ArcelorMittal Orbit, which will become a tourist attraction. What you see in this picture is pretty much what you’ll get. For a long time I thought it was scaffolding, but this is the actual Orbit. Designed by Anish Kapoor and Cecil Balmond, the Orbit is the UK’s tallest sculpture. Visitors will go up in a lift to the observation deck, which is the spaceship-like thing you can see. You should be able to see across much of London from the deck. Most visitors to the Orbit will have to walk down the 400 and something steps back to the bottom. I used to think the Orbit was pretty ugly, but the more I see it, I find myself warming to it.

A view of the Orbit, which stands at the entrance to the Park, and the Stadium together.

Past the Stadium is the Aquatic Centre, designed by Zaha Hadid. After the Stadium, it’s probably going to the venue of the most watched events. If Michael Phelps reproduces his Beijing performance in London, the pool will be filled will the echoes of thousands of people’s cheers. Hadid was inspired in her design by water, so the centre has lots of curved lines and the roof is shaped like a wave. It’s difficult to see from the side but aerial views show the shape properly. Since I wasn’t in a helicopter though, you’ll have to use your imagination or search for professional pictures to see what I’m talking about.

Here’s the Copper Box, which will be used for Olympic handball, goalball and for the fencing part of the modern pentathlon. It’s surrounded by metal fencing at the moment as work is done on the surrounding area, but you can see the really cool public artwork just in front of it, spelling out the word run in huge letters which glint in the sun.

The Velodrome (above) is where Team GB is likely to win many of its medals, as our cyclists battle it out in a variety of disciplines. It’s one of my favourite buildings on the site, I like the shape and look of it, with the bronze/gold cladding that goes around the edge, which you can see a close-up picture of above and to the left. 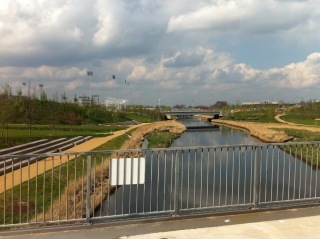 The Olympic Park, before becoming the Olympic Park, was largely home to factories and workshops, and much of the water was apparently contaminated. It’s been cleaned up and lots of landscaping put in. This area will be among a number in the Park where people can relax between events, and will be expanded once the Games are over and before the Park reopens. 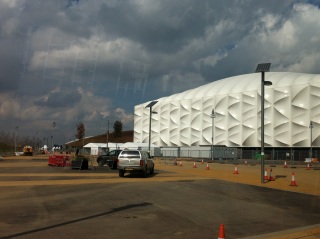 This white building is the basketball arena and is one of the largest-ever temporary venues built for any Olympic Games. It will be used for Olympic basketball and handball, and for wheelchair basketball and wheelchair rugby during the Paralympics. Rio de Janeiro, holding the next Olympics, is looking at the way London is using temporary venues with a view to doing something similar in 2016 with a number of their venues. There is a slight possibility they could transport some of London’s temporary venues to Rio, but I highly doubt a country holding the Games would want someone else’s cast off seconds – surely you’d want to build your own structures to impress?!

Whatever happens on the field or in the arena, this is where the action will be afterwards – the athlete’s village. Competitors for the Games will stay here, in specially built flats. It’s where they will prepare themselves for the Games, commiserate and celebrate. The flats currently don’t have any kitchens, since the athletes will be fully catered for, so when the Games are over the flats will have to be made new and one room in each converted to a kitchen before they can be sold. 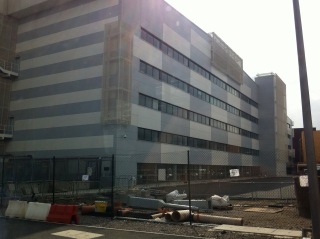 This is the press and broadcast centre (I think), which will house 20,000 media personnel from across the world who are covering the Games. It’s an absolutely gigantic building, and later this year the London Legacy Development Corporation will announce who has won the contract for what will be done with it after the Games. The contenders are for it to become a fashion hub, a leisure hub or something to do with technology.

The below photo shows one of the numerous signs hanging around the Park, and is for the workers on site. In case you can’t see it, it tells everyone on site to be considerate, be healthy, be safe and be proud while working. 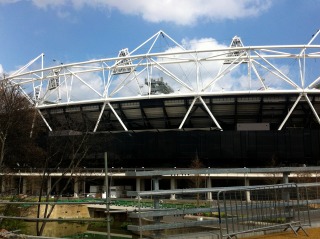 There’s lots on the Olympic site that I didn’t get to see because of all the work being done still, so just before the tour finishes it goes round to the other side of the Stadium, which is across the water from Hackney Wick.

And so that’s it, my tour of the Park complete. I should be going round again in a month or so, and I’m hoping there’ll have been lots of changes, so keep an eye out for another photo post. In the meantime, here’s a view of the Stadium and the Orbit from Pudding Mill Lane DLR station.