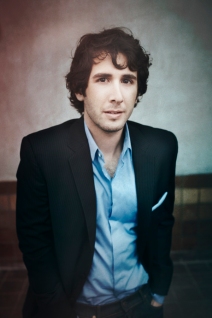 I have a friend, whose reaction every time I mentioned I was going to see Josh Groban was to burst into hysterical laughter.

Despite finding him amusing on Never Mind the Buzzcocks, she couldn’t understand why I was excited, or why anyone below the age of 40 would want to see him. In fact, for her, me going to see Groban was worse than me going to see Cliff Richard or even Steps (don’t all rush for reunion tour tickets now, will you?).

So, my darling friend, this review is dedicated to you and all the other disbelievers out there.

The Groban experience started before the audience even got inside the venue last night. Approaching the Apollo the queue snaked outside the building, and walking the length of it to try and find the back led people past a host of fans – some hard-core “Grobanites”, some not. There were couples of all ages, groups of friends (aged anywhere from in their late teens to their late, well, I’m too polite to say), families and more.

Ignoring the touts selling unofficial merchandise (if I’m going to buy overpriced crap I’m going to at least get the good stuff), everyone queued calmly, setting the tone for the evening – civilised.

Because that’s what the whole event was, very civilised. In the surroundings of the Apollo (much smaller than I expected), those who didn’t get seats stood calmly at the sides, and everyone stopped talking when the band came out to play their introductory instrumental version of Straight to You, the song from Groban’s latest album, Illuminations, that the tour is named after.

Still, being civilised is no barrier to screaming, and there was plenty of that throughout the night – when Groban came out, whenever he spoke, whenever he finished a song, and of course when he came down from the stage to grab a few lucky audience members to join him for a glass of wine back on stage.

The wine and audience members on stage is a nod to a smaller set of concerts Groban did earlier this year. During those (the Before We Begin tour) Groban mentioned he liked the more intimate feel of interacting with his audience, and elements of last night’s concert were copied straight from there.

Having seen various clips of Groban picking fans, pulling them up on stage, sitting them down and then telling them he was going to sing a song about cheating (Broken Vow), I felt a weird sense of de ja vu, and it wasn’t as fresh as I might have liked it. Still, watching Groban being felt up on an stage by a fan and taking it in his stride by cracking jokes was fun.

The Straight to You tour is a great mix of Groban songs old and new, and some are reworked brilliantly to give them a new edge (You Are Loved) while others are just so gorgeous they don’t need reworking (Oceano).

Of course, being as this is a tour for the latest album, there was plenty on the playlist from Illuminations. Disappointingly, he didn’t sing my favourite tunes (Love Only Knows and Straight to You), but the rest of the show was so good I guess I can forgive him.

Groban’s band are world-class musicians, and it would almost be unfair to pick out just one person for praise. Almost. Special mention must go to violinist Christian Hebel, who did a brilliant job throughout, but was particularly fantastic on Mi Mancherai, which is essentially a duet between Groban and a violin (go YouTube it if you think that descriptions sounds strange).

Special mention must also go to the Grobanites. Everyone in the room last night was a Groban fan, but the Grobanites are a special type of fan, slightly more vocal, slightly crazier, but in the absolute best of ways. They were the ones waving glowsticks in the air throughout, and dancing their way through some of the faster numbers. You go!

For the fans Groban is as appealing for his personality and sense of humour (aforementioned NMTB appearances etc) as he is for his music, so it was great to see him answering a few audience questions and giving out little tidbits of information about his songs. I wouldn’t have minded hearing him talk a bit more though, although that would probably have involved either cutting back the number of songs (NO!) or taking the show over two hours. Considering Groban was on stage for close to 120 minutes already, I think he was probably exhausted enough by the end.

Of course, even after he left the stage, he did come back for a couple of encores. Getting the audience to join in with You Raise Me Up, he reminded everyone just how superior his version is to Westlife’s (as if we needed reminded). He pulled out a brilliant cover version of Neil Diamond’s Play Me, playing the piano for that number as well.

In America the Straight to You tour has played bigger venues than the Apollo, but the smaller venue as an advantage for the audience last night when it came to Groban building a connection with his fans, a connection that no one wanted to break.

So it was perfect that the show’s very last number was a cover of Charlie Chaplin’s Smile, a beautifully melancholy song that summed up the fact that no one in the room (Groban included) quite wanted the evening to end, but they we would all continue to smile, even though our hearts were aching.